Delaware Shakespeare’s Summer Festival is back after a year of lockdown.

And one of the performances at Rockwood Park delivers multiple interpretations of Shakespeare’s play “As You Like It.”

Delaware Public Media’s Delaware Community Foundation intern Kayla Williams recently checked out a performance to meet those behind it.

“As You Like It” is a Shakespeare comedy that centers around Rosalind, a cross-dressing, strong-willed woman. This year, Del Shakes' Summer Festival offers three takes on this classic character.

“We’ve paired up three different actor-director pairings, each representing a different cultural background, and asked them to explore this role through who they are.” said Stradley. "You will see a short monologue from each of the actors, then in between each monologue, an interview. We call this performance - part performance, part talk show."

The first of the three performers is Lexi Thammavong, who recently graduated with a musical theater degree. She believes exploring Rosalind through different cultural lenses unlocked something.

Satchel Williams has a background in acting, writing/directing, and filmmaking. She did not want to create a Rosalind who’s defining characteristic is being black.

“Looking at Shakespeare and trying to navigate and decide how I'm going to embody this character that was most certainly not supposed to be played by me ... creating her character was all leaning into the parts of her that resonate with me as a black individual, like her wit and her gumption. That's something I respect in a lot of the Black women idols I have" said Williams. "It was really freeing. It was fun."

Rachel O’Hanlon Rodriguiez, a Philadelphia-based actor, poet and teaching artist worked with director Tanaquil Márquez, who helped her reconnect with her Latin roots.

“Tana is super-fluent in Spanish and I am not super-fluent in Spanish. There is a lot of shame in that because a lot of my Puerto Rican family members don't speak Spanish anymore and some of that is just by choice, assimilating to American culture," said Rodriguiez. "So I've been trying to find my way back to my own language. but I feel like there was sometimes a block on that. And Tana was so patient and I feel like it unlocked something in my own brain. I now hear spanish more clearly, and I can read it more clearly.”

The actors all appreciated working with directors of color . Williams worked with Mariah Ghant and they found the pairing of two black women produced a strong and trusting dynamic.

"I think it only added to the process of allowing us to dive in deep from the beginning," said Ghant. "It allowed us to clear away so much of the excess of being worried how I'm presenting myself. Am I doing enough? Am I coming with the right questions? I knew immediately whatever Satchel said, whatever I said, I knew we would have some way to connect and share a similar idea, a similar thought on Rosalind."

“It's nice to know that I have trust with the person I'm working with, especially in the context of the show. It's about putting our identities forward," said Williams. "So instead of it being something I carry with me - and carry with pride - it's something I can lead with at the forefront and immediately know I don’t have to defend myself.”

"Freedom and safety are two words that are remaining in my head as I think about this experience."- Actor Lexi Thammavong.

And the comfort the actors felt allowed them to be who they are on stage unapologetically.

“Freedom and safety are two words that are remaining in my head as I think about this experience," said Thammavong. "Often times, we talk about representation in theater and often forget about the other side of the table. And that can create a toxic and unsafe environment for many actors”

And the product of this unique approach landed with the audience

“I felt like when you read Shakespeare as a minority, you don’t find yourself in his writings. But I saw how they did it and they incorportated their cultures and related it back to the audience. And I really liked that” said Rahim, who attended a performance last week

The next performance of Rosalind x3 is July 29th at 7pm at Rockwood Park. To get more information on this show and other shows visit Delaware Shakespeare's website.

This article was produced with support of a grant from the Delaware Community Foundation. For more information, visit delcf.org/journalism.

Delaware Public Media' s arts coverage is made possible, in part, by support from the Delaware Division of the Arts, a state agency dedicated to nurturing and supporting the arts in Delaware, in partnership with the National Endowment for the Arts. 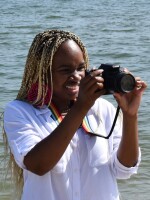