The Univ. of Delaware has gotten some serious attention this month with both of its basketball teams reaching the NCAA Tournament.

But how do you turn those briefly caught up in March Madness into true blue Blue Hen supporters. Delaware Public Media intern Patrick LaPorte – a UD senior - reports on UD’s efforts to build and keep a fanbase.

Delaware Public Media intern Patrick LaPorte reports on the Univ. of Delaware's efforts to build a fan base for its sports

The University of Delaware’s rich history of past athletic success runs deep in Newark. From Delaware football’s runs with Tubby Raymond and K.C. Keeler to recent long-term success of women’s field hockey, sports are embedded in the DNA of Blue Hens fans.

Delaware alumni Eric Kramer is one of the fans you find at almost every Delaware game. The 2018 graduate finds time before and after games to talk with players and coaches. Kramer says he tries his best each day to support the teams and the student athletes.

“I always say it's important to try and get as much love as possible now because that's their playing career, they’ve worked all their life to get there,” Kramer said. “So it's always good to see them blossom and grow in college.”

Kramer recognized the passion of the Delaware fan base during his time as a Blue Hen. He says fellow alumni even tried to recruit him to join alumni clubs that follow the university’s basketball and football programs.

“I try and give as much time as possible to try and go to these things and meet people,” Kramer said.

Kramer’s energy and passion is what newly hired football head coach and former UD quarterback Ryan Carty wants to build on. He’s seen it firsthand – recalling the first day he entered Delaware stadium as a fan to see his brother, Kevin, face the Hens as a quarterback for William and Mary.

“I’m pretty sure it was the first day that speed sweep existed as a Delaware wing-T football play and William and Mary could not stop it,” Carty said. “And I remember Brett Veach running down the sideline and I want to say it was Jamin Elliot, these guys were just sprinting down the sidelines untouched.”

Carty was stuck by the atmosphere at Delaware Stadium as he watched his brother battle Delaware into overtime.

“I was blown away by the support of an FCS program and how loud it got,” Carty said. “The game went into overtime and my brother was playing in it going back and forth, it was such a special place.”

And during Carty’s time as a recruit and player that atmosphere never wavered. As a player, Carty found himself signing autographs and giving wristbands to children.

“It was special, there was a difference in the care factor of the community,” Carty said. “It was kind of built into the community as opposed to something to do on a Saturday.”

Back-to-back tournament appearances for men's basketball under Mike Brey in the late 90’s and the women in ithe early 2010’s with Elena Delle Donne saw the Bob filled with the Blue Hen faithful.

Fast forward to 2016 and multiple programs were seeking a new direction. Men’s basketball remained without a head coach after it fired Monte Ross and Delaware football struggled under Head Coach Dave Brock.

But newly hired Athletic Director Chrissi Rawak saw that moment as an opportunity to revive the Blue Hens rather than completely rebuild.

“One of the things that really attracted me about this opportunity was the success that this place has had, the fan base and just the overall community support that was clear that was in this place at one time,” Rawak said.

So as Rawak brought Martin Ingelsby to coach men’s basketball and replaced Dave Brock with Danny Rocco on the football sideline – she also moved to motivate fans to return – starting with football.

In 2011 following the program’s appearance in the FCS Championship Game, UD introduced a required payment to the athletic fund to purchase season tickets – a decision that sparked a decline in season ticket sales and attendance.

From 2011-2014 Delaware saw its football attendance sink from around nineteen thousand fans per game to just over 15,000.

“When that took place, from what we’ve heard, that wasn’t communicated very well and there were a lot of frustrated season ticket holders,” Delaware’s Jordan Skolnick said. “Fast forward to 2016 we lost 75% of our season ticket base.”

Not what UD wanted to see as it was eyeing a stadium renovation – so Skolnick says rescinding the policy was a no brainer entering the 2017 season.

“One of the first things we did was we removed the required seat donation,” Skolnick said. “And that was not easy from a revenue perspective, but it was very easy from a doing the right thing for our fans perspective.”

With the seat tax gone, Rawak looked to the future of the athletic complex. The $60 million Whitney Athletic Center served as phase one in a three-part effort to update Newark’s south campus.

“I want sustainable championship programs. I don't want just one winning moment. That is not relevant. That's being recognized. The relevancy comes from - it's consistent. And it's happening across all programs. And that's what we're striving for.”

According to Rawak, two prior efforts for a stadium remodel fell short before her arrival. So, she says they did not go public with the project a third time until they fundraised 80% of the project’s $60 million price tag.

The university pitched in $25 million and matched each donation towards the project.

“The institutional support was so important because our donors needed to know that the university was committed as well and it actually worked very well for us, because it was a matching gift,” Rawak said.

Now, with the Whitney Athletic Center and Delaware Stadium facelift complete to give football a boost , basketball gets a shot in the arm with UD making hardwood history.

Delaware men’s and women’s basketball clinched NCAA Tournament berths in the same season for the first time this month.

And Delaware leaned into making fans part of the post-season push – providing buses for students to attend both the men’s and women’s semifinals and championship games in Washington D.C. and Philadelphia.

Blue Hen Forward Andrew Carr says the team talked with Rawak prior to the team’s championship game to encourage getting fans and students down to the nation’s capital.

“It was loud,” Carr said. “It was loud yesterday without a bunch of students there, so we knew with all those student buses that we were going to have a lot of people in the crowd and it means the world.”

Then, the school hosted a Selection Sunday watch party at the Bob as the teams learned who they would face in the NCAA Tournament. And both the men’s and women’s teams were greeted by standing ovations.

Women’s Head Coach Natasha Adair says it was just part of an overwhelming wave of support.

“The text messages from other teams, our men’s program, so many fans you know it didn’t surprise me,” Adair said. “But it felt really good and our players for sure felt proud.”

“I want sustainable championship programs. I don't want just one winning moment. That is not relevant. That's being recognized,” Rawak said. “The relevancy comes from - it's consistent. And it's happening across all programs. And that's what we're striving for.” 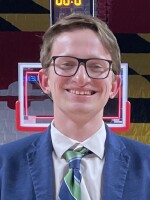 Patrick LaPorte
Patrick, an intern since February 2022, is a senior at the University of Delaware, studying media communications and journalism.
See stories by Patrick LaPorte