Congress passed the most significant federal gun reform legislation in decades late Thursday, sending it to the White House for President Biden's signature.

The bill – titled the Bipartisan Safer Communities Act – came together following recent mass shootings at a Uvalde, Texas, elementary school and a Buffalo, New York, supermarket that was in a predominantly Black neighborhood.

The new legislation received strong support on both sides of the aisle and will notably implement red flag laws while also addressing school safety and mental health.

Delaware's senior Senator Tom Carper applauded his colleagues for the bipartisan effort, but points out that there’s more to be done to help curb gun violence.

“The idea that 18-year-old kids can walk into a gun store and buy an automatic weapon is wrong-headed, and [so is] not even having a background check,” Carper said. “I think we can do some more work on background checks, 90 percent of voters in this country think this is appropriate. So, there are a couple pieces that we need to come back on and do better.”

Leadership among the Democrats hoped the legislation would go further in reining in gun violence and were only able to get Republicans to agree on more modest measures. Democrats, in particular, still cheered the bill’s passage as a landmark event.

It’s been notoriously difficult for lawmakers in recent years to secure bipartisan agreement on any kind of major gun legislation. The passing of this gun safety bill ends nearly three decades of congressional gridlock on laws surrounding firearms.

Carper says how the bipartisan gun deal shows that middle ground on issues is attainable and he hopes the conversations that led to this bill passing can continue on other gun safety measures and other issues, like climate change.

“I’m encouraged,” Carper said. “The Senate is for us to be the deliberative body. When tempers calm down, we need to find consensus. We expect the Senate to do that.” 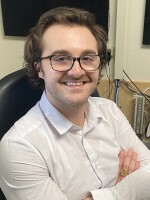 Kyle McKinnon
Kyle McKinnon is a producer for The Green with a passion for audio storytelling. In that role, he’s responsible for helping script,
See stories by Kyle McKinnon